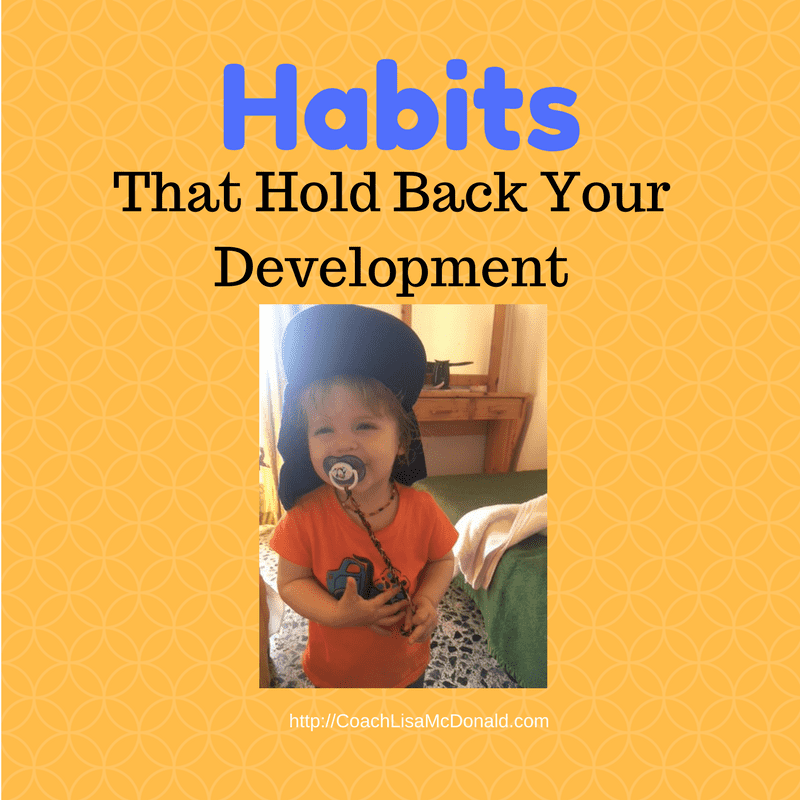 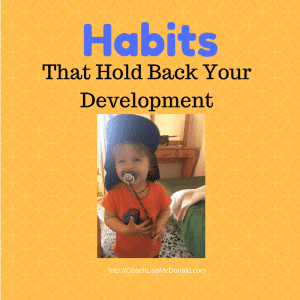 Habits are something that affect all of us.  They can support our development or they can hold us back.  And that’s the focus of today’s blog post “Habits That Hold Back Your Development”

Lessons From A Dummy

Recently we’ve gone through the process of weaning Charlie from his “dummy” (or “pacifier”) habit.  In the early days it was used as an occasional strategy, when he was in a heightened state of upset.

Concerned about the frequency some family members popped it into his mouth, I spoke to the pediatrician about it at a consultation on another matter.  He said it was better for Charlie to use the dummy than his finger as that habit created dental problems.  He also pointed out that fingers are always there and instantly accessible, while a dummy is much easier to remove at some point.

After weaning him off breast feeding he wanted it more.  I saw that it was a partial replacement for what was no longer available to him.  Then a few months later I was travelling with a friend and Charlie was in unfamiliar territory, so I let Charlie have it more as a form of comfort and familiarity.  On returning home he started asking for it more and more and some family members obliged.

We then started making conscious effort to reduce access to the dummy because he was getting too attached to the habit.  When we went out we’d get him to leave it in the car (he liked having it in the car).  But at home he was insistent about having it a lot of the time.  We then started putting it out of reach (he was able to get it himself off lower surfaces) periodically during the day.

Recently I took him to the dentist for his first checkup.  I was told that his bite had become crooked because of his dummy habit, particularly on one side(because he sucked the dummy more on that side).  She said that it was still developing, and that it would take around 12 months to correct.  Or longer, if he continued using the dummy.  She encouraged me to get him off  the habit as soon as possible.  And, reinforced the message by saying that, if it wasn’t done before his next lot of teeth came through, that jaw surgery would be the only way to correct it.  Yikes! OK so that was a big incentive, and became the catalyst for speeding up the process!

The first step was to withdraw it during the day, and only for sleeping. Of course he didn’t take to kindly to the change. It took a full on 3 days of howling for him to settle down. He oscillated between being cross and pulling back from me and being really clingy. It was wearing but giving in would have made the problem worse.

The next week I withdrew it for his day sleep. He asked for it but only made a small amount of fuss.
One night, about a week later before heading away for a week, I encouraged him to try going to sleep without it in the evening. He obliged without much fuss at all.  I repeated it for the next few nights including while away. Yay!

He still asks for it most days somewhere along the way. More often when he’s tired or feeling unsettled – naturally, it had been a form of comfort to him.

If a two year old, with a relatively short habit takes that amount of time to adjust, you can understand why it takes us adults so long to adapt to change and ween off our addictions. We’ve usually had our habit, addiction or pattern for a lengthy period of time …

Reflecting on this story of weaning my son off his dummy habit, got me thinking about how we attach comfort to people, things and situations.  And the more we repeat our use and reliance on them, the more the attachment and habit forming they become.

Whether you’re aware of it or not, your habits are shaping your world.  They are creating everything that’s in your life and the results you are experiencing.

To change the shape of your world and to achieve more of your goals, you need to work on your habits.  You need to identify the habits which are limiting your capacity to achieve results, and replace them with habits that will will assist you in being successful.

Habits Hold Back Your Development

Over time the costs and benefits of continuing a habit may change.  A habit that starts out as a reasonable solution, may turn out to be detrimental down the track.

We may be oblivious to the changes.  Or we might be aware because symptoms are starting to appear or get worse.  For example in you may start seeing changes in your health, relationships, business or finances.  It may be simply that you’ve hit a ceiling and are struggling to make in inroads or progress with your goals.  Or it could be that someone has pointed it out to you – like the dentist pointed out Charlie’s crooked bite problem.

Take a few moments now to reflect on your important goals and your habits.

What habits do you have that are :

Reshaping Your Habits for Success

Having reflected on the habits which are holding you back (see above), take some time now to create a plan for how you will reshape your habits.  Then empower yourself by starting to implement your plan.

PS Want some help to reshape your habits so you can achieve more of your goals and dreams?  If so, please contact me and we’ll chat about the next step –  I’d love to support you.

More from my site
Quote: When I Stand Before …
Every Drop In The Ocean Counts
Quote: Think of All The Beauty …
Quote: By Recording Your Dreams And Goals …
Discouraged By Other People’s Negative Beliefs?
Quotes: I Am Always Ready To Learn …
Quotes: Let our advance worrying …
You Do Have The Power To Overcome